Mike Nagoda is a Canadian Blues musician based out of Toronto. Born with Cerebral Palsy and playing music since he was six, he began his musical journey with classical piano but eventually fell in love with jazz, blues, progressive rock and heavy metal in his teenage years.

During his youth, the instrument he most wanted to play was the guitar, but couldnt due to his disability. After a few years of trying to play conventional lap steel and the frustrations surrounding the limitations of only being able to get major chords with one slide, Mike stumbled upon a system invented by his friend and mentor, Brian Cober: double slide guitar. 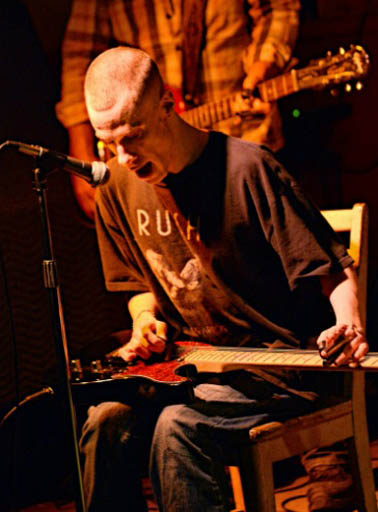 This system of two slides on one hand allows Mike to get any chord or play in any style of music. Mike took up the double slide guitar and began practising constantly, until after years of hard work and dedication he released his debut album, Parliament, a blues rock concept album about post apocalyptic Canada, on Ropeadope Records in 2014.

There was, however, more to Mikes story. Since his teens, Mike knew he was attracted to men. Having been raised in a religiously conservative home, he struggled with his sexuality for years and remained closeted. He fell in love with and got married to his wife before eventually realising he was gay. Mike came out to his wife, who accepted him for who he is and encouraged him to start coming out and be himself. He is now in a happy open, polyamorous relationship with his wife and boyfriend and with their support slowly came out to his friends and family.

Mike also realised he wanted to tell this part of his story through his music and decided it no longer made sense to remain closeted as an artist, coming out fully as an LGBT artist in June of 2015 during Pride Month. Viewing the Blues historically as a musical genre that has its roots in hardships, Mike thought it would be perfectly suited to give voice to his struggles and experiences as a gay man, as well as the joy hes experienced on his journey. He is currently working on music for his second album with Ropeadope Records, tentatively titled Outside the Box, with pre-production to begin in August and his guitar playing was recently featured on the blog of Guitar World Magazine.