Man of the Street, is the title song from the debut album by Kray-z Legz, a new UK rapper with spina bifida.

Mixed in New York by well known hip-hop producer Anno Domini, the autobiographical track is about the rapper's childhood. During this time, Kray-Z Legz had over 30 painful operations. It includes personal lyrics like: "U had to be the man, who had to stand strong. Always stood by my side, Every time time every op."

The 27 year-old wheelchair user comes from Street in Somerset, which is arguably a little less "street" than New York and California where established disabled rappers Four Wheel City and Krip-Hop Nation, can be found.

Music has always been important to Kray-z Legz, aka Mark Humphries, who started playing the violin aged four. In his teens he became known locally as a drum and bass MC, working with acts such as Grooverider, and Drumsound & Bassline Smith.

Other words from the track: "Still I love u dad, Even now I'm a man. I'm a make things right, take ya hand from the can" Refer to this period of Mark's young life, spent living with his then alcoholic father. 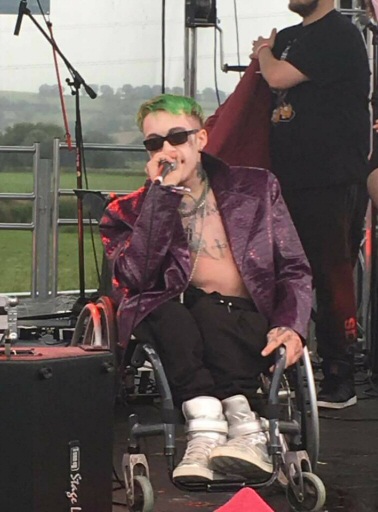 Mark was failing English before he started writing songs. Penning lyrics led him to study poetry which helped him pass his exams. He went on to do a catering qualification before focusing completely on his first love, music.

All the lyrics are written and recorded in the home studio Mark and his best friend Gavin saved for years to create. They plan to release Man of the Street on their new record label, Lost4tz. But Mark has yet to make any money from his musical endeavours.

Sought-after US producer Anno Domini mixed the album for Kray-z Legz; he has also produced tracks for top artists Wu-Tang Clan and D12.