Alan Holdsworth became Johnny Crescendo basically as a joke. Originally from Manchester in the UK, he currently resides in Phillidelphia in the USA.

He says "It was during the punk era, I was reading poetry and doing stand up comedy in clubs in Britain and one day, gave myself a stage name. It was a take of the working class Latin lover singing 'My Way' in a dive with too much reverb. Suddenly I was getting loads of gigs and the name stuck. I was almost Sammy Scrabble or Tony Monopoly."

Johnny Crescendo is a true icon of the worldwide disabled people's movement. He is a tireless activist and advocate; his history spans the early days of the formation of the disability rights movement through the heights of direct action to the philosophy of the future. 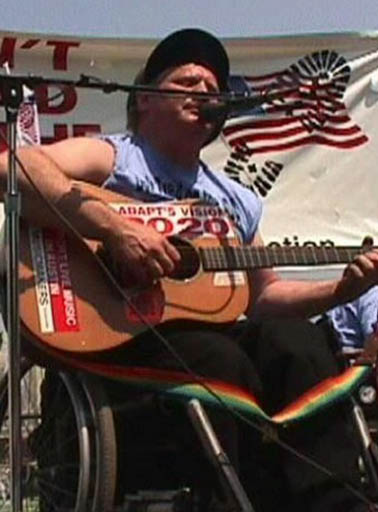 Through Johnny's many experiences as a disability rights activist he confronted many issues and met many amazing people. These experiences inspired Johnny and he was one of the first artists to write songs and poetry which so candidly told the story of the disability rights movement. Johnny has touched many people with disabilities all over the world through his advocacy and music.

Johnny burst onto the disability arts scene in 1988 with his song "Choices and Rights", which became an anthem for disabled people all over the world. Since then he has toured extensively in the UK, the US and Europe, Russia, and recently been to Australia. In 1990 he coined the phrases disability pride and piss on pity, challenging the stereotypes that disabled people experience. In 1990 his performance was the final act at Disabled People's International in Vancouver, Canada.

Johnny has played mainstream gigs too, including opening the 1993 Cambridge Folk Festival and the Glastonbury Festival. In 1995 his 3rd album Pride contained two songs that would become future anthems for disabled people around the world. Pride, the title track, is a song about how disabled people can be proud of who they are, and their strength in working together. And Ballad of Josie Evans is a harrowing story of a disabled person in an institution. Two of his other songs have been selected for a Songs of Freedom album commissioned by the government of South Africa.

Johnny has made regular apperances on TV and radio both in Britain and around the world. He plays guitar and harmonica and has a voice made for folk rock and Blues. Described as the Bob Dylan of the disabled people's movement, his performances are dynamic and electric, with tremendous emotional commitment.