Jasmin Bataille is a young drummer from Montreal in Canada.

When Jasmin is asked "Why drumming?" he answers "Because drumming is one of the most raw, ancient form of expression that ever existed. I can feel it in my bones, in my soul, in my blood, in my muscles, in the air flowing around me in harmony with my movements... I can feel my heart pumping as I lay down a big groove or a sensual one, but progressively I forget my heart to the profit of bass drum, my brain became the snare, my decisions are the toms and my emotions, the cymbals. That's why..."

At 7 years old Jasmin started out with the african Djembe, and his dad got back to guitar at the same time.

One year after, he passed through a skin cancer (lymphoedema) located on his right knee. Jasmin explains "I had two work 2 times harder to get my actual bass drum technique." 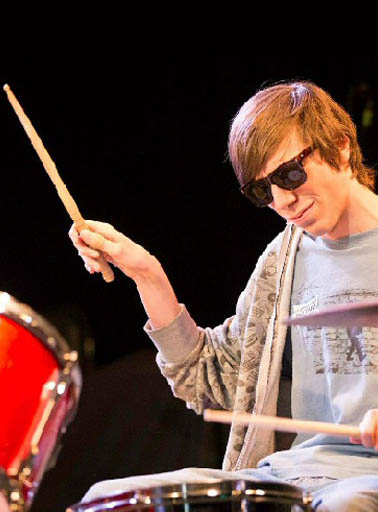 Jasmin adds "My dad, while helping me to survive, also transmitted me the swing, and soon I was feeling the drumsticks on an old phonebook wrapped in duck-tape - the ''guetto pad''." On Jasmin's 11th birthday he got a propper drumset.

Jasmin has a few current projects going. He is rehearsing with the Oxy-Jeune's Houseband for a tour of Montreal city's park. Jasmin says "I'm featured in a future documentary on TV5 as part of this project.", he is rehearsing with his dad to open Sainte-Catherine's street on the 13th of june this summer, among the casual club gigs. Also, rehearsing with Quentin Tremblay for our new punk-rock duo Arkaïk, and currently producing lo-fi/acid jazz for D-Jazz, a duo with my friend and great classical alto violionist Dillon Hatcher.