David is one of the founding board members of Can-Do Musos.

The hard work and determination that led John McEnroe to victory upon victory in his legendary tennis career also inspired a young boy affected by the debilitating Arthrogryposis to fight tirelessly to become a highly successful... drummer.

David Segal was born two months premature at New York Hospital in New York City, afflicted at birth with Arthrogryposis, a condition that is characterized by clubbed hands and feet. While cases can vary in intensity, Segal was born with both of his feet, "... almost backwards," which over the years required close to 20 corrective surgeries. Further, while his right hand was functional, the would-be drummer could neither make a fist nor grip with his left hand. 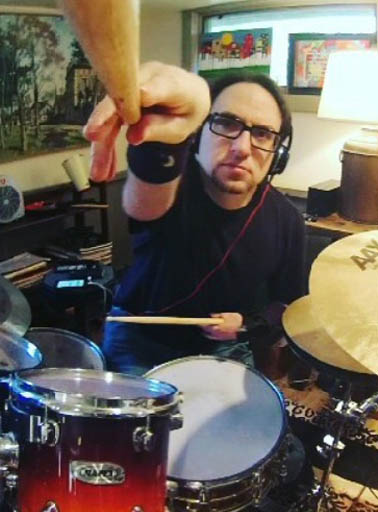 Regardless of circumstances, David Segal persevered, and overcame multiple obstacles to achieve a career that involves performances at Carnegie Hall and the NAMM Show, as well as being one of the founding members of Can-Do Musos, an organization dedicated to the support and promotion of musicians with disabilities, all across the world.

Unable to walk until he was about 4 years old, David made up for lost time as a youngster, playing every imaginable sport, most enthusiastically, tennis. Segal says, "I wanted to fit in. I was in the middle ground, not disabled in a wheelchair, but not normal, either." Being able to use one hand to hold the racquet made tennis a viable option for a while, but despite his determination, it became evident during middle school, that he had reached his full potential, and would not progress to become the next John McEnroe, as he had hoped.

During this time, as he was weaning off of sports, he discovered something even more intriguing waiting around the bend, in another hallway of his junior high school. David recalls stopping in the band room one day, where he was intrigued by, "...these far-out woodwind instruments." Soon after, he went to visit a friend, who had a snare drum and cymbal set up in his house. David attempted the intro of U2s, "Sunday, Bloody Sunday", and was immediately hooked. Without dwelling on his capsized dreams of becoming a pro tennis player, he thought to himself, "This is something I want to do really badly!"

Shortly thereafter, on a trip to Mannys Music in NYC, Davids mother ran into a drum teacher, Fred Klatz. Though Klatz did not have any experience working with disabled students, he had no qualms about teaching David. At the first lesson, it was apparent that they needed to develop a way for David to hold the sticks, so Klatz came up with a contraption made of a wristband and duct tape, and it seemed to work pretty well.

One of the biggest challenges was with rebound (controlling the bounce). David says, "... (Drumming) was never natural for me. Time and practice were the only things that helped." But he could not be deterred. He started to, "... practice, practice, practice, practice," sometimes to his downstairs neighbors dismay. The drums echoed through the wall, so he couldnt play until he moved the set.

Two years later, while shopping with his father in a Los Angeles, he had a chance encounter with legendary drummer, Buddy Rich. When Davids father approached the celebrity, and explained that his son was learning to play drums at home in New York, he was shocked as Buddy handed them his phone number, and told David to call him when he was back on the East coast. Filled with anxiety, David mustered the gumption to call him. As a result, he was invited to see Buddy play in "Sounds of Brazil", an event at which his teacher, Fred Klatz, served as the (delighted) chaperone.

During the intermission, both David and Fred were allowed to board the tour bus, where David was surprised by Buddys seemingly mellow manner. Klatz, however, unbeknownst to David, was a bit sick, and because of his cough, was asked to wait outside for his student. "I had no idea," David recalls with a chuckle, "I felt like I won the lottery. Buddy gave me his sticks, and I was on cloud nine." In his regular good nature, Fred afterwards pointed out, "I think Buddy has taken a liking to you."

The nourishing energy absorbed from that experience fueled Segal through his high school years, during which he studied various styles of music, while playing with a band. Nonetheless, despite huge strides and enormous improvement in his technique, the primitive wristband method was not quite enough, and David was still struggling to determine the best way to play the drums, as he took the next step in his academic career, and entered college. Following his senior year of high school, he required yet another extensive surgery. Since his legs were two different lengths, doctors removed bone from the longer leg in a painful procedure. Afterwards, he was lost - he wasnt in school, couldnt do normal things that people his age were doing, and felt overwhelmed with pressure.

It was his teacher, Fred Klatz, who met him at the crossroads, and told him to snap out of it, and get back to drumming, which prompted David to enroll in a media studies program at Hunter College, and play in the jazz band. Upon graduation, he got a job working for CBS Radio, where he took advantage of the opportunity to meet the DJs, and watch the pros in action. It was at that time that a friend told him about a band called The Sin Taxes that was looking for a drummer. With this punk-folk-rock band, Segal played regularly in the Village.

In the midst of their budding success, in 1998, The Sin Taxes decided to record a demo; however, the thrill of the experience was overshadowed by the fact that David had to play to a click track for the first time in his life, and found himself, due to his constraints, constantly chasing the click. He couldnt do it. Despite being one of the executive producers, David played only one song on the CD, and agreed that they needed to hire another drummer for the rest of the gig, an occurrence that was an incredible blow to his ego. David was, however, very instrumental in getting their work played on the air, thanks to his many DJ connections, and his willingness to put in the work needed to send the demo to as many radio stations as possible.

In 2001, the band played their last gig, leaving Segal to wonder what was next for him, and after a year of starving for opportunities to grow musically, David came across the KoSA website. It felt to him like a perfect opportunity, so he decided to attend the summer camp with other people whose philosophy was that, "... music is the only universal language" and that,"... with the sharing of music, the world works better, much better."

The KoSA camp was a game-changer for Segal, which inspired him to pursue his bachelors degree in music at City College. Throughout that time, as his playing continued to improve, he also continued to attend KoSA camps regularly, where, in 2004, he experienced another life-changing moment, when he met Dom Famularo, Drummings Global Ambassador.

Dom was leading a session on the Moeller Technique, which David attended. After watching David play during private lessons, Dom helped him make modifications to the wristband that would allow him to use a matching pair of sticks, and also suggested that he move the ride cymbal behind his right leg, behind the floor tom, and the difference was apparent. At that time, David was also studying with Mario Monaco, who helped him with his Brazilian feel.

David soon realized that he was able to play a samba rhythm quite well, "... I was now able to lead with my left hand, and samba kind of became my thing." Having a "thing" was a pivotal experience in his drumming career, as it led to more connections and opportunities to play with a greater number of notable musicians.

In 2008, David ran into Liberty DeVitto (drummer for Billy Joel and The Slim Kings), whom he had met at one of the KoSA camps. Liberty was at the Guitar Center in Brooklyn with publisher, Jules Follett, and the two were collaborating on a book project called, Sticks N Skins, which is a compilation of photos of 500 drummers from around the world, among them many of the biggest names in music history. Liberty recalls, "I saw David in the Guitar Center ... I told Jules Follett he needed to be in the Sticks N Skins book. He is a great drummer, and is an inspiration to me and everyone he meets."

When Liberty told him that the experience (of being included in the book) was going to change his life, he wasnt kidding. The publicity has elevated the talented, determined drummer to a higher level on all platforms: performing, teaching and special projects.

Since then, David has earned his masters degree in music, and become one of the founding members of Can Do Musos, a collaboration with Dom Famularo and two highly talented, disabled musicians, Andrew Hewitt, and Mike Mignogna. "Dom believed that there had to be something bigger that we could create, and invited the three of us to a meeting," to discuss the ways that they might work together to empower all disabled musicians.

At the NAMM Show in both 2015 and 2016, David, Mike, Andrew and board member, Joe Hardy, took to the stage to perform together, and they are presently making plans to return to play at the show in 2017.

David, himself, recently achieved another lifelong goal when he performed at Carnegie Hall with the NYJA Orchestra. "It was something I had always dreamed of doing." David recalls his favorite moment of the event, with both of his parents, his aunt and a student of his sitting in the audience, "...I loved the sound of the horns in a hall like that, and the thunderous applause afterwards."

Reflecting on his life so far, and the onerous odds stacked against him, David says, "My mother told me that when I was a kid on the beach, I was building a sand castle near the water. The waves repeatedly ruined my castle, but I refused to give up, and continued building it in the same place."