Challenge: Born with no forearms

Cornel Hrisca-Munn is a disabled drummer and musician originally from Romania.

Cornel was born with no forearms and wants to show the world he can do anything he wants to do. Nothing will stop him. He was taken from birth without his parents consent and put in an orphanage at Suceava, northern Romania. His parents parents traced him but, as they were so poor, it was impossible for them to even consider taking him home as both worked long hours to support other siblings. And so Cornel remained for 9 long months until Doreen Munn first saw him in September 1992 whilst delivering aid to Romania.

An orphanage doctor asked her if anything could possibly be done in the UK to help this little boy. On return to England, enquiries were made and, with help from a nursing friend Anne Martin, an offer of free treatment on his useless twisted leg was made by Worcester BUPA Hospital. 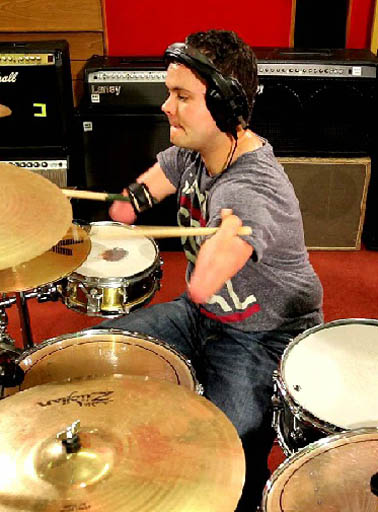 The next 7 months were spent in contact with various officials in Romania to try and arrange for Cornel to travel to England for treatment. This included contacting his parents through the orphanage to gain their legal consent.

Doreen and Ken Munn adopted Cornel giving the love and family he needed.

At a young age Cornel was active in cycling and swimming, he also has taught himself to play the bass guitar and drums. At age 14 Cornel defeated 400 others in a national drumming competition placing 2nd overall. Today Cornel has been discovered through YouTube.