Growing up in Marietta, Ohio. Brock Davisson began playing guitar in 1992, thanks to his brother who wanted a mo-ped but their Dad didn't think it was safe enough for him yet, so he went and bought an old Silver tone guitar with a battery operated Harmony amp.

Brock says "Of course we didn't know what to do with it, so it stayed under the bed for 6 months or so until something hit us and that was the band Nirvana... I still give them credit for getting me into music along with my Dad."

Brock says "I can't play like a normal person due to my wrists not turning over, so I had to teach myself how to play over top the way I do. I am 4'4" tall and have dwarfism. I'm a blues lover by heart and soul, it's in me. I also love other types of music too like metal and jazz and more." 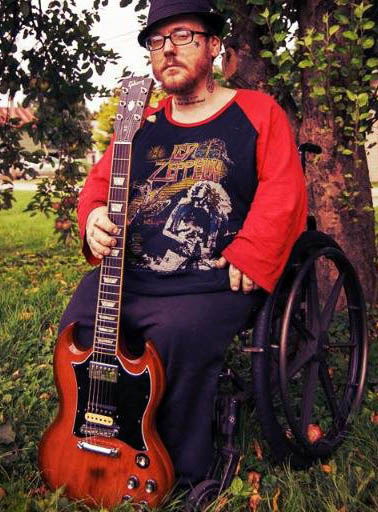 Brock grew up with having different types of surgeries on his legs and hips and has the scars to prove that now.

He got into Metal like Metallica and Megadeth. Brock adds "Later I journeyed into the blues such as: Stevie Ray Vaughan and BB King. Then I explored Shred Kings like Joe Satriani, Steve Vai, and Yngwie Malmsteen."

Brock plays mostly electric guitar, but he also dabble in keyboard/synths and bass sometimes. He adds "Sure, I try to sing even if I sound like a frog ha-ha. I'll give a shot at anything that makes sounds basically ha-ha."

Brock's unorthodox style of playing, akin to that of a lap steel guitarist or a pianist, is a result of his dwarfism, which makes it difficult to play in a traditional manner. However, playing came natural to him after his dad gave him his first guitar when he was aged 14.

Brock says "I just put my hands on there and started noodling, I'm so used to playing this way that I don't know if I would actually be who I am today if I played like everyone else."

Having been in a nursing home for a few months back in his teen days and many hospital days and nights growing up, Brock adds "Music has always been a friend of mine. I personally wouldn't wanna exist without music. I'm constantly listening or playing or talking about it."


Brock Davisson - "The Coming of Winter"