Andrew is one of the founding board members of Can-Do Musos.

Andrew Hewitt, dubbed as "Australia's most inspirational drummer", is starting to become one of the most talked about drummers on the national and international drumming and disability communities.

He was born with Cerebral Palsy, which restricts movement in his arms and legs, which forces him to use a wheelchair. This has made drumming a very serious challenge.

Despite this, over the past 20 years Andrew has worked successfully as a Performing Artist, Drum Teacher, Drum set Clinician, Motivational Speaker, Workshop Facilitator, and Disability Advocate.

Andrew travels regularly performing and hosting drum and percussion workshops all over Australia. 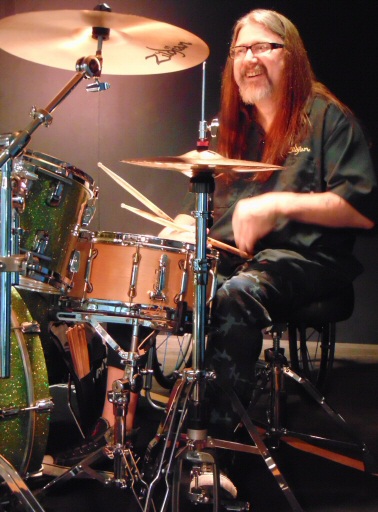 On top of this, Andrew runs his own drum teaching studio in Western Sydney, where he teaches students of all abilities.

In March 2013, Andrew went to the United States and learnt Eddie Tuduri's TRAP program (The Rhythmic Arts Project), which is a workshop based program to teach people with disabilities to read, spell, count and use life skills using drums and percussion. He has become Australia's first TRAP facilitator, which he is starting to build clientelle for TRAP workshops around Sydney.

While in the United States, Andrew did a clinic performance sponsored by Zildjian Cymbals for other TRAP Trainees and clients of United Cerebral Palsy at the Westside Community Center in Santa Barbara, California, then travelled to New York to meet with Dom, Mike and David with a purpose to form Can-Do Musos.

Andrew has appeared globally in publications such as Modern Drummer (USA), DRUM!, Rhythm (UK), The Black Page (Canada) and regularly in Australia's own Drumscene magazine.

In January 2015, Andrew flew back to the USA, to help present Can-Do Musos in the H.O.T. Zone at The NAMM Show on 25th January in Anaheim, California together with Dom Famularo, David Segal, Michael Mignogna, Joe Hardy, Dean Zimmer, and Mark E Goffeney.

In August, together with fellow Can-Do Musos, Mark Goffeney and Bill Clements, Andrew was included in the Eight Most Remarkable & Inspirational Musicians in the world by UK magazine RawRamp.

January 2016, Andrew and the Can-Do Musos team presented again in TEC Tracks at the Winter NAMM Show 2016 in Anaheim. During this presentation, Andrew made his debut NAMM performance.

In December, Andrew was interviewed nationally in Australia on ABC News (Radio and TV) for International Day for Persons with a Disability.

in January 2017, Andrew was part of the Can-Do Musos performance opening The NAMM Show.

In May, Andrew presented to "Music Without Borders", a disability arts forum in St Petersburg, Russia, from his home in Sydney via Skype. In September, Andrew was part of a story on ABC TV's Lateline program in support of wheelchair travel site "Have Wheelchair Will Travel". During the interview Andrew played drums, and talked about travelling wheelchair and all.

In October 2017, Andrew travelled to Berlin, Germany where he did some workshops and performances for Arts Access Australia, and a clinic performance at Just Music Berlin. In June 2018, Andrew was featured in German drum magazine Drums & Percussion. The article was posted on the Remo USA website, translated in English.