Alan Cornett was born into a musical family and started on the drums at 5 years of age. Alan adds "Got my 1st snare and cymbal which I enthusiastically hit everyday for weeks until the top head split and well, turned the drum over and destroyed that quicker!" Alan is self taught with a few attempts at proper lessons but was unable to sit still long enough to grasp the language of notes.

Alan listened and was exposed to a large variety of music in the LIVE setting since birth and his brother who played drums for a while then turned into a guitarist by age 10 while accompanying their dad a working drummer and trumpet player to many gigs.

Alan joined his first proper group at the age of 12 and also learned on the spot playing with his dad while he would go out front and play trumpet. 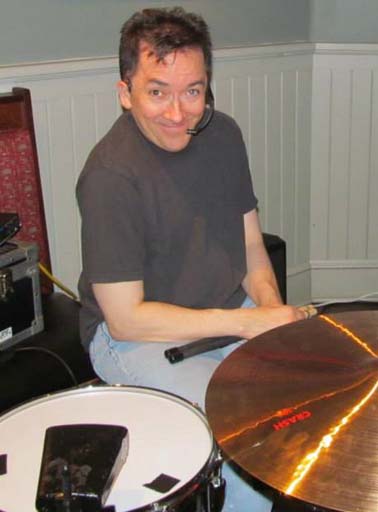 Alan says "I Fell in love with the response of a live audience and dedicated many hours to playing to great records and jamming with many players. I enjoyed the marching and jazz bands in high school despite not reading!" Thanks to a good understanding of jazz tunes Alan was able to participate and enjoy that experience. Alan played in all sorts of bands but mainly rock music has been the most constant.

After a few victories in 82-83 as part of the Carmine Appice drum battles that passed through town, Alan went to Los Angeles and did good. He adds "Even though not winning had fun and made some friends who would go on to great success". In 1985 Alan joined a songwriter guitarist Gene Ryder who was working on a record label signing move to February 1986 and Alan's chance at showcasing in LA and a good shot at the next level of "The Dream" all went very well.

Sadly on 25th February 1986, Alan as a passenger in the car of a friend was involved in a 3 car auto accident that left him paralyzed from the neck down. Alan says "I sustained an incomplete spinal cord injury and was given a prognosis of never walking or playing drums again". Devastated and in great pain for 9 weeks, Alan noticed that tiny forms of return were taking shape.

Alan says "I went to rehab for 6 months and thank GOD was able to take a 1st step in early May before my 25th birthday. I came up with the idea of mouth triggering via a headset mic in 1988 but the technology was a bit slow for that idea". Alan then discovered the amazing ddrum2 module. He adds "Upon getting it and thinking I could use my voice to trigger the bass drum I discovered the vibrations were not solid enough to create a solid kick sound. Ah, but a miracle of tongue clicking changed that and I was truly on my way! I have always said that module saved my career and worked even harder to retrain my approach to drumming and expression". Several years of pads but with real cymbals led to Alan's first few gigs and by '93 joining a local but busy band and having the dream of coming back realized.

Many gigs and then motivational speaking, school visits and other disability related functions has kept Alan active and fulfilled these past 23 years.

Alan's rig is made up of Ludwig, Paiste and of course the Ddrum 2 & 4 modules. Alan has been a Regal Tip artist since 1999! Alan says "Iam so very lucky and also proud of the positive effect that my accident lead me to live a different but satisfying life. I never dreamed that I would learn the lessons I have without it. Best of all,, the response of so many people and their appreciation, support and encouragement these past 30 years".