Sujeet Desai is an accomplished musician born with Down syndrome. Sujeet plays seven instruments. Bb and Bass clarinet, Alto Saxophone, Violin, Trumpet, Piano & Drums. In June 2001 he graduated from high School with honors and in May 2003 from the Berkshire Hills Music Academy in Massachusetts after two-year residential Post-secondary study in Music and Human services. Sujeet travels worldwide to do inspirational solo music performances and self-advocacy workshops.

After the graduation he worked as a teachers aide for a music department in an elementary school. He taught music & basic computer skills to adults in Day Hab. programs in Buffalo. Currently he plays his music in community churches, nursing homes, senior centers, hospitals to bring joy to those away from home and family. 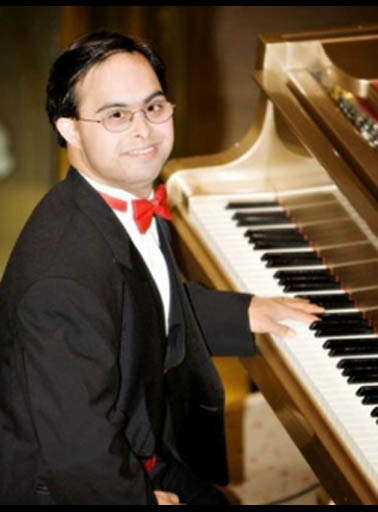 He is a member of a couple of community bands. Sujeet enjoys independent living in his own home with some support.

In 1998, when Sujeet started to volunteer his entertainment the overwhelming response received from his audience led to his decision to make music his career. His highest musical achievement was Carnegie Hall Debut on May 20th, 2015 with standing ovation. And as a motivational self-advocate a Presidents award in Singapore in year 2000. Since 2000 he has performed in over 40 states, and 13 countries. Sujeet is a recipient of 16 International and numerous National awards 7 Honors for his music and self-advocacy.

Besides music Sujeet is at 4th level 2nd Dan Black Belt in martial arts Tae Kwon Do. He used to be Sensei at Martial Arts school teaching young children. He is a winner of Gold & silver medals in the World Games 1999 Special Olympics in Swimming and numerous medals in Special Olympics in Alpine skiing, Cross-country running and Bowling. He enjoys replying his friends from all over the world that visit his web site as well face book.

Two documentaries were done on Sujeets life and had many TV & newspaper interviews. He is been featured in the wall street journal, New York Times, aired on the National TV shows The View, 20/20, Oprah Winfrey, WCNY public channels and much local TV news. He was honored by NDSS as National spokesperson for Down syndrome and was published in 40 magazines nationwide as THE TRAVELER to raise awareness of Down syndrome campaign. Sujeet is as an Ambassador of Down Syndrome International (DSI) based in London, Global Down Syndrome Foundation ( GDSF) from Denver, CO. New York Best Buddies International as well few other disability organizations in US.

Sujeet has worked very hard for last 20 years trying to become the finest musician he can be, while also working to overcome the limitations of his disability. Music has helped him bridge this gap. With his musical versatility Sujeet is become a role model and has brought inspiration and hope to individuals with disability, their parents, educators, and the services that work with them. Sujeet's family takes pride in him for all that he has brought into their lives.

Sujeet performs with a musical power point workshop My Story: How I improvise my life with multiple intelligences. Sujeet's MISSION is to send a message across the world that given opportunities for their abilities individual with disabilities can Make It Happen! Sujeet's music is more than just an entertainment. It's educational, inspirational and focused to make his MISSION POSSIBLE!

In 2016. Sujeet along with other Can-Do Musos members were involved in the We're The Superhumans campaign in London for the Rio 2016 Paralympic Games.