Steve Lucas is the last surviving founding member of infamous Aussie punk band X. He is also a producer singer/songwriter and has fronted various other bands of note. Steve became an ambassador for ChildWise in 2012.

Steve Lucas was recently honoured as a part of the Living Legend Series at The Tote this year.

Steve has played as far afield as Kathmandu (for a fundraiser to treat the poverty stricken populace for cancer with Glenn Tilbrook (UK SQUEEZE) and Slim Jim (STRAY CATS) an outdoor event broadcast live to several million viewers.toured the West Coast of the USA and all round Australia.

The sentimental punk, known as the 'guy who never sold out' has become an integral part of Melbourne's live music scene, still recording, still gigging and keeping it real. 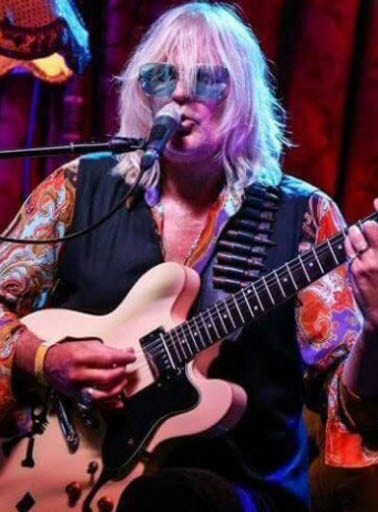 He has recorded numerous LP's and singles.

Some of Steve's songs have been included on numerous compilation cd's and records.

Steve has also produced Lethal in Leather for DollSquad and A Fox and a Prayer for his Madelaine for her Triple J Unearthed Campaign,

Over the years, Steve has contributed compositions for Film and TV where his works have been included in The Boys, The Idiot Box, Cracker Jack, Over There (US), Bondi Rescue, Big Brother, and a Yoplait commercial 'Make It Happen' screened during the Emmys and Country Music Awards in the USA.

Steve has been lucky enough to play main support for acts such as Iggy Pop, The Cramps, The Damned, The Stranglers, Dr Feel Good,Sonic Youth, Henry Rollins, The Anti Nowhere League, Rob Lowe. He was also asked to sing for The Sweet and offered a tour in 'The Glitter band. (Both of which he declined).

Steve says "Wake In Fright, a great name for a movie. Wake in pain and it's a grim reality' a life sentence. That's how it's been for countless yesterdays and how it will for the rest of your life. So you have a choice. There's always a choice. So you own this pin or does it own you? I was advised to embrace it and to love it for the insights it can bring. I thought "Are you kidding'' but over time I realized it was the only option".

Back in 2010 Steve was moonlighting a renderer, picking up some cash because gigs were slow. He adds "I'd been working, by myself, on the facade of the Metro Palace in Bourke St Melbourne. It had been a long job, back breaking and I'd finally finished. As I walked away from it I turned around to look at it one last time and I heard and felt a pop, down in my lower back. 'Well that's gonna hurt tomorrow' I thought but by the time I'd walked a few blocks it was a,ready burning like a hot coal. I decided to ignore it, do some stretches and thought it would pass.

From then on there's no linear memory, just a series of impressions".

Steve rang around a found a physiotherapist who did home visits and twisted and contorted his body and lower back unknowingly forcing more and more of the toxic and noxious fluid from a ruptured disc further and further into his spinal column. Steve adds "The pain was off any scale. After he was done, I could not move. To lay down was torture, to sit or stand was unbearable. He left assuring me i'd feel better once things settled. They didn't. I forced myself up the road to the nearest GP to try and get some pain killers".

After a few minutes Steve was packaged of for an MRI and that's when the truth came out. He had ruptured a disc, the fluid had entered his spinal column and apart from the excruciating pain his left leg had ceased to function.

Steve adds "They gave me morphine patches and opiates to take and told me to go to hospital for emergency treatment. My treatment at that hospital was so degrading I don't really like thinking about it. The assumption was I was nothing but a long haired musician/junkie with the emphasis on 'nothing'. I kept speaking of unbearable pain, no feeling, weeping uncontrollably and the doctor grabbed his car keys from his pocket grabbed my let foot and jammed them into and ripped them up the sole of my left foot. When I didn't flinch he through my charts at me and stormed off. Lesson learned, no one but you, can feel your pain. It was a desperately lonely feeling on top of everything else I was going through".

Someone came back and said the window of doing an operation had closed. This was Steve's new world.

So he was sent home with a bundle of scripts. Found a sympathetic GP and was put on a disability pension. Steve adds "I was taking 500 milligrams of time release morphine, Anamorph, Oxycontin and up to 20 Panadine fortes a day and still could not bare to be touched, bumped or moved, I wanted to die".

He adds "My girlfriend, no my wife, had other plans. She rang, googled searched high and low for an non invasive surgical procedure that would help me. It took a while and I was introduced to a Dr Bruce Mitchell and finally given some hope. There was a treatment. Success varied from 60 to 80 % improvement but .... it cost thousands of dollars of which I had none. So I had to go on private health for a year then do the op. A year of unspeakable pain. I told him I couldn't do it. He urged me to do something I'd always wanted to do. I told him I always wanted to tour he West Coast of the USA, lol.. but that won't happen, I told him. He persisted why not. Seriously? I knew he understood my pain but surely he didn't expect me to go on tour!?! He spoke to my GP, physio and psychologist and they all agreed I needed to do something".

Funny how once you surrender to fate how things work out. Steve adds "I was approached by a label in America to license X-Aspirations for a limited vinyl release. I said yes, if you organize a tour of the West Coast. And so it happened".

He says "Now I'm not going to bullshit and say it was a blast, best time ever! I barely remember it I was so pilled out with opiates. Was wheel chaired on and off he flights and the back of the mini bus we toured in was made into a bed for me. The tour was a success financially and mentally. It showed me, delirious as I was, that I could still 'function' and have purpose".

Steve came back to Australia and played as much as possible, dragging his pain and leg around with him.

Steve had the treatment. 60% improvement! He adds "Downside, the pain receptors in my brain were so traumatized they couldn't shut down completely. I got my left leg working again though and proceeded with my life. To help with the neuropathy I bought a drum kit and set it up for left handed player. It helped strengthen and regain a lot of lost coordination in my left leg. So 7 years later I'm afraid there's no happy ending. As I type I'm suffering from some kid of relapse. Perhaps I've pushed myself too hard of late. I've taken 4 times my prescribed medication and it hasn't touched me. So what?quot;.

Steve plays a lot of gigs around Melbourne. He adds "I know that while I'm playing I go some place else and for a while I'm free, over all I have massively reduced the pharmaceuticals and with the live and support of my wife, Joey, I have a pretty good life. The thing I've learned is not to dwell on it. Chronic pain is like depression in that you really have to something to keep it in check. Occupy your mind. Own it. Dominate it or it will own and dominate you. There are no miracle cures but if you use you will power it is surprising what you can archive. Chronic pain is a total bitch. There are times when I almost beg for local anesthetic just so I can consciously experience a few hours of life with no pain. Moral of the story? Keep on rocking. Do what you love and enjoy life for what it is".