Patrick Henry Hughes is a remarkable young man who was born without eyes and without the ability to fully straighten his arms and legs, making him unable to walk. Additionally, two steel rods were surgically attached to Patrick's spine to correct scoliosis.

Despite circumstances that may seem overwhelming, Patrick has overcome these physical issues to excel as a musician, student, performer and public speaker. Patrick started playing the piano at the age of only nine months, and also plays the trumpet and sings.

He even participated in the University of Louisville Marching Band for five seasons with help from his father, Patrick John Hughes, who tirelessly maneuvered his wheel chair through the formations with the other 220+ members of the Cardinal Marching Band. 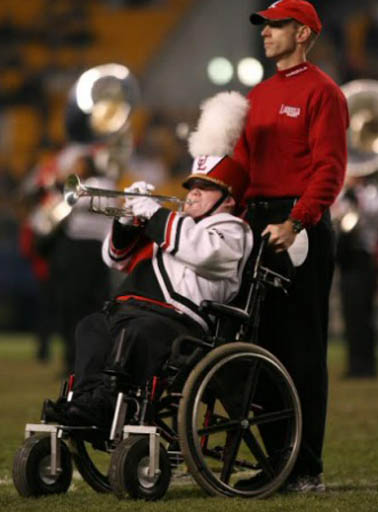 A virtuoso pianist, vocalist and trumpet player, Patrick has won or finished very high in numerous competitions, as well as winning awards acknowledging the circumstances he has overcome to achieve these heights. He has been featured on ESPN, ABC-TV, Oprah, CBS-TV, The Ellen Show, Extreme Make Over Home Edition, FOX-TV, CSTV, NBC-TV, The Today Show, Million Dollar Round Table, The Grand Ole Opry, People Magazine, Sports Illustrated, Star Magazine, and many, many others.

Patrick has made appearances from California to New York and Chicago to Texas and Miami and countless points in between, even performing in Asia, Canada, South America and Europe.

Patrick's first book, I Am Potential, has been published and is available around the country and world in different languages. In 2015, his story was released in movie form called I Am Potential - based on the true story of Patrick Henry Hughes. He has also recorded 2 CD's.

Traveling the nation and the world - sharing a story of overcoming obstacles, breaking barriers, seeing what's on the inside and doing and being more than you think you can. Over the years, Patrick Henry Hughes has inspired and motivated millions of people around the world to reach their full potential.

In 2016. Patrick along with other Can-Do Musos members were involved in the We're The Superhumans campaign in London for the Rio 2016 Paralympic Games.