A snowy blanket covered Katoomba on the afternoon I found out I had sarcoma, a rare type of cancer, in my left arm. The roads were scattered with abandoned cars. It was apocalyptic, a scene analogous to the past year of my life.

For 30 years, Neill Duncan made a living playing saxophone, either solo or in bands, but his music career almost came to an end when a rare form of cancer caused doctors in Sydney to amputate his left arm.

Niell says "I'm a musician. I support my family with one tool: my saxophone. So discovering I had cancer in my arm - and then having it chopped off - was a very dark time. It all happened very quickly. After two rounds of chemotherapy at Royal Prince Alfred Hospital I had my amputation the week before Christmas 2012. Strangely enough, I was quite calm about it." 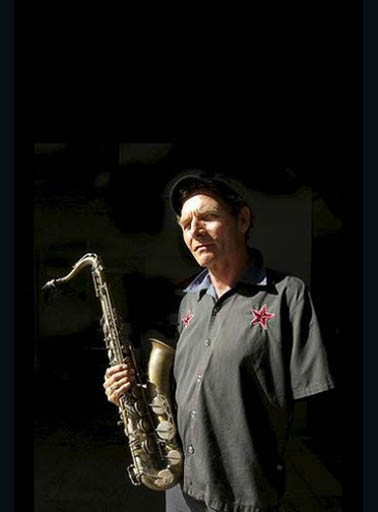 Being a jazz saxophone player, losing his arm was very dramatic and affected Niell's friends deeply, especially Michael Lira, who I play with in the band Darth Vegas.

Michael said he didn't want to believe I would never play again and had Googled 'one armed sax player' and found a guy in Amsterdam who made instruments for one-armed musicians.

It has taken a year for instrument maker Maarten Visser to custom build the world's only one-hand tenor sax especially for Neill. He hydraulically moved all the top keys to the bottom so Neill can play just using his right hand.

Neill says "It's been amazing. When I first picked it up to play it was completely out of this world. I'm starting to find a new sound and a new style which is very exciting. I'm getting the same feeling as I did 30 years ago when I first picked up a sax. The instrument itself is very counterintuitive."

Niell adds "It's putting fingers down to get high notes instead of putting them up. Half the horn is the opposite of normal but it's been bliss being able to play again."

With a $26,000 price tag it was way out of Neill's budget. Then he started getting phone calls. One was from Support Act, a benevolent society for musicians who come into hard times. They put money towards Neill's mortgage and the new saxophone.

Neill explains "Musicians don't have a safety net. We don't have sick pay or annual leave. I feel incredibly blessed and supported by initiatives, the community and family. It's been a hard road, learning to live with one arm  but having something that might kill me has made me so grateful to be here."

In 2016. Neil along with other Can-Do Musos members were involved in the We're The Superhumans campaign in London for the Rio 2016 Paralympic Games.