Mark Goffeney is a native San Diegan whose talent and ambition have helped him to achieve ongoing success as a performer, speaker and television personality. Mark has been recognized for his work internationally and was nominated for an Emmy award in 1998 for his principal role in the Fox Network commercial, "Feet".

Born without arms in 1969, Mark was raised to see himself as an equal in society and to value independence. With these values instilled, Mark was soon noticed by several charities and by 1973 had become a Poster Child and principal; fund-raiser for both the Variety Club and March of Dimes.

For the next decade, Mark co-hosted hundreds of telethons working side by side with celebrities including Monte Hall and Kathy Lee Gifford. By 1981, Mark was credited for having raised over 6 million dollars for children's charities. He appeared on Real People, The Mike Douglas Show and Regis Philbin. By age nine, Mark was attempting to create his own music, but choosing an instrument would prove to be a challenge. For a while he played trombone in the school band, then his dad brought home an old guitar he had found on a jobsite. 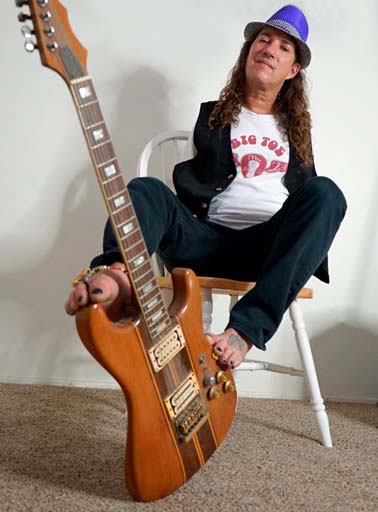 With his friend's help, Mark soon developed his own technique. He would lay the guitar on the ground, supporting the neck with whatever he could get his feet on. He would strum with his left foot and make chords with his right.

By the end of the nineties, Mark had successfully completed his first CD, titled "Big Toe". Sponsored by PSB Records and produced by Steve Dudas (known for his work with Aerosmith and Ozzy Osbourne). This CD is a collection of Mark Goffeneys greatest, original songs and was featured in the San Diego Readers "Best of the Best".

In Recent years Mark and his band Big Toe have appeared on ARD TV in Germany where he opened for Lee Ann Rimes on the hit show, "Lippe Blofft"; and "Explosive" Two Korean network shows, "Amazing World" on SBS and "Amazing People" on MBC.

At home in the U.S. Big Toe was given two thumbs up by producer David Foster, (winner of sixteen Grammy Awards for his Work with Celine Dion) and Travis Barker (of Blink 182) on NBC Star Tomorrow in 2006. One year later in Oct. of 2007, Big Toe performed on the Fox network Show "The next Great American Band". The show was Created by Simon Cowell of "American Idol". After the performance, Johnny Resnik, lead singer of the Goo Goo Dolls said "you kick ass on the bass guitar!"

In January 2015, along with a couple of performances, Mark helped present Can-Do Musos in the H.O.T. Zone at The NAMM Show in Anaheim, California together with Dom Famularo, Andrew Hewitt, David Segal, Joe Hardy, Dean Zimmer and Michael Mignogna.

In 2016. Mark along with other Can-Do Musos members were involved in the We're The Superhumans campaign in London for the Rio 2016 Paralympic Games.