Marc Playle was born in South Shields, England, UK on September 26th 1985. He first took an interest in playing guitar at the age of 14 when he and his friend Daniel were bored in the long summer holidays.

He converted half of his garage into a studio where he used to jam with his friends. Having a missing left forearm meant he had to experiment to figure out the best way he could be able to play guitar. After many ideas such as taping guitar picks to his arm and using socks and things he came up with the idea for a player which is a cast of his arm that was then made from acrylic resin. It has lots of features that enable him to do most techniques on the electric guitar such as: a cut out for palm muting and pinch harmonics, a part of a guitar pick for picking and a cut out of a leather belt used for tapping.

Once he had a winning way of playing guitar, he then played in a few local bands he started with friends from school. 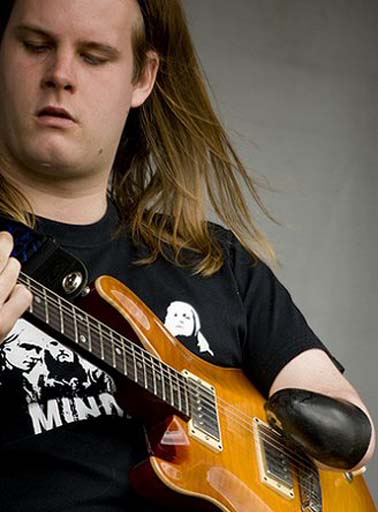 In 2001, Marc met a Local Guitar hero, Phil Thorrell and asked him for guitar lessons. During this time, Marcs practical and technical side of playing increased dramatically as well as being introduced to guitarists like Michael Lee Firkins, Greg Howe, Eric Johnson to name a few.

At the age of 16 and playing in the local music scene, he attracted a lot of interest from the local newpapers and local television news because of his guitar playing.

In spring 2008 he entered the online guitar competition Guitar Idol 2008 run by online magazine www.alloutguitar.com mainly to promote his band. Out of over 750 guitarists from all over the world he was chosen as one of the 12 finalists. The final was held at the London International Music Show in the Excel at London Docklands. Because of this contest he was picked up again by the local newspapers and television news and was also asked to perform his entry on national TV programme Richard & Judy.

Not long after Guitar Idol he entered the Dean Shredder contest and out of over 1100 entrants from around the world finished in the top 15.

Marc is working on his own guitar based material with Jay Schellen (from Hurricane, Asia featuring John Payne and GPS) on drums.

Marc is also working on a new band Sky Red.

In 2016. Mark along with other Can-Do Musos members were involved in the We're The Superhumans campaign in London for the Rio 2016 Paralympic Games.