Born with a arthrogryposis, Dean Zimmer has triumphed over skeptics.

Dean, now in his 50s, has a condition that severely restricts joint movement in his arms and legs. Nine operations have given him slightly more coordination, but the truth remains: He will never walk properly or have full use of his arms. He must rely on effort and practice.

Dean Zimmer laughs today about his night of humiliation more than a decade ago. It sure beats more tears.

Dean who uses a wheelchair, was playing drums at his South Dakota high school in the mid-1970s when a drumstick fell to the floor. He attempted to compensate by beating fiercely with the other but then dropped that one. The band stopped. Dean was crushed. 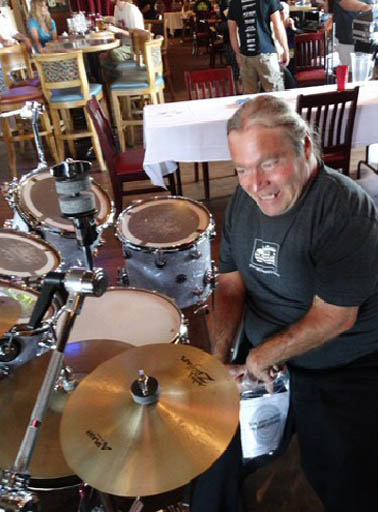 "I wanted to crawl into the woodwork," he said.

Instead, Dean looked toward the future. These days he plays drums every Tuesday night at Club M in Canoga Park in California.

Dean's drumsticks are attached by straps to his wrists so that his embarrassment of years ago won't be repeated. While hardly securing a regular gig, Dean doesn't belong to a band. He has triumphed over his insecurities and over the skeptics who assumed he would never make music - even his family had their doubts.

Despite this, Dean began playing drums about 30 years ago, by banging on his legs before moving to a drum set.

"He's found that inner center," said Mark Craney, former drummer for Jethro Tull, who helped Dean land the Tuesday night gig. They met in 1980 at a concert Craney gave in South Dakota. "His playing is consistent and creative. His biggest problem is just getting a chance."

Gregg Bissonette, drummer for David Lee Roth and Ringo Starr and his All-Starr Band says, "Anybody can play fast, but he's really a musical drummer." Dean has always said he's never had a music class and that all he's ever known is how to "play from the heart." And watching him play, you'll believe that.

Here's an all-too-frequent scenario: Dean answers an ad for a drummer, calls the band to set up an audition. When he shows up, the band is often surprised to learn Dean is in a wheelchair.

Dean says "I didn't tell them my situation on the phone, and when they saw me, it was frustrating. It's hard to find musicians who can get past the chair and everything." Zimmer gets the audition, but not the job because, he said, band members are turned off by how long it takes him to set up his equipment. By himself, it takes him an hour to set up the drums; friends often help him.

For years, Dean didn't own a drum kit, all he had was just a dream. Growing up in South Dakota, he fell in love with music. "My mom always heard me with a radio. I wanted to play an instrument, and guitar was out of the question," said Dean because of the limited use of his fingers.

Dean had to improvise before he could afford a drum set. For hours, he used his legs as fake drums, learning the beat of the music. Attending a school for the handicapped in Sioux Falls, S.D., Zimmer met Ken Roll, the son of one of his teachers, who taught him how to play on a whole set. Zimmer practiced incessantly, building the endurance level required for long concerts.

"I've seen him in a speed metal band," said Craney, who knew Dean from South Dakota, "and I was holding my breath to see him get through a song, let alone a set. But he does it".

At first, Dean knew that taking up drums wasn't going to receive total support from his family. "Nobody really told me I couldn't do it, but I could just see it in people's eyes." At school he was surrounded by people who, he said, didn't fight hard enough to overcome their adversities. Dean says &quptI was the opposite of that. I wasn't handicapped; I just couldn't walk real good".

Rick Abbott, one of Dean's bandmates, says their group has opened for acts like Eddie Money, Styx, Kansas, and Thin Lizzy throughout their career.

"It's just amazing to see him play because when he's playing he can't just sit there and move his arms and legs like normal." Abbott says. "He's bouncing around and it's all part of the motion, and when you see him you're like, 'Alright, this guy is gonna try to play the drums,' and then you see him and you're like, 'Huh?'"

Dean meanwhile, would rather play drums than talk about his drumming. He says "Play from the heart, man, that's all I ever knew."

In 2016. Dean along with other Can-Do Musos members were involved in the We're The Superhumans campaign in London for the Rio 2016 Paralympic Games.